During the 1949/50 season Piero Rosset of Aosta and Mario Bechaz had the idea of setting up a ski school at Pila. Bechaz became the first director and as there had to be four founding members they were joined by two army instructors: Angelo Bettega and Renato Belletti. The first office was a room opposite the "Lion Noir" hotel. The school aimed to be similar to the existing ski schools at Cervinia and Courmayeur, where there was not a great demand for instructors who generally worked only on Sundays and public holidays.

At Pila there were two cable car/ski-lift installations managed by different companies and the instructors soon became a reference point in co-ordinating the resort's activities, also when preparing the slopes, assisted sometimes by the army. At that time the clients, almost always Sunday skiers, used to ski in groups of two or three with an instructor, who generally accompanied rather than taught them. The resort was not widely publicised and the instructors weren't as yet working with the local ski clubs.Over the years the number of skiing instructors- slowly but steadily increased.
The ski-lift companies asked the instructors to provide a more permanent presence at the resort and so a group of professional instructors guaranteed lessons during weekdays. As however giving skiing lessons did not guarantee a minimum salary, the "permanent" instructors were "paid" by the Regional Authorities which, together with the ski-lift companies, offered the tourists "instructor-service".

This formula, inaugurated at Pila, was soon copied in other resorts in Aosta Valley. Large companies began organising ski courses for their staff, schools offered lessons for their students and the "Gruppo Sportivo Ricreativo Olivetti" of Ivrea brought coachloads of Sunday skiers.

With this increased demand the profession of ski instructor became more important, as you can see today. 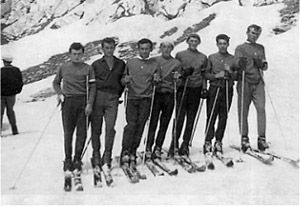 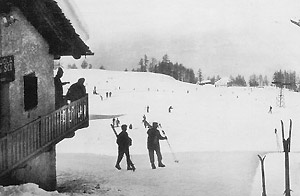 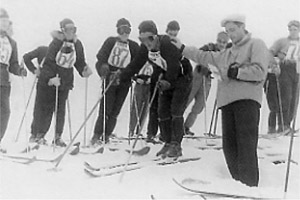